A special morning in the mountains today… After months of closure for some invisible project being performed by the mine to the north, my trailhead is finally open again. Whatever they had been doing appeared to have been completed months ago, but still the trail remained closed. Finally I called and prompted someone to look into it and it turns out that the trail could be opened. 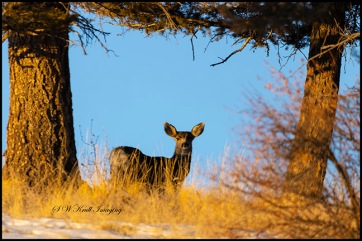 So this morning I loaded up the camera and the snowshoes and headed for the hills. It has been so long… I wondered if my ungulate friends were still there or if they had all  been shot by the trigger happy redneck population so prevalent here in the high country?

Well my question was soon answered… as I made my way up the steep ascent I could feel eyes upon me. I stopped and looked around a bit and sure enough, peering over the mountaintop were a couple of does wondering what I was up to 🙂 I stopped for a few shots before ascending further. The deer were waiting for me at the summit, warily staying just ahead of me in case they deemed it necessary to flee. 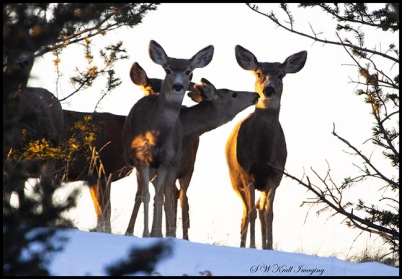 paths parted. They meandered into the woods to the north as I turned left to complete the loop and head back down. One lone free range cow greeted me in  the deep snow, other than that I just made my way back down the mountain in the quiet of the morning.

Sadness filled my heart in the silence of the windward side of the mountain as I remembered my beautiful four legged companion who was so filled with joy at the freedom of the trail and the fresh mountain air his nose was constantly sampling. This was our special place and to be there without him was heartbreaking at first. soon however, I found comfort in the knowledge that he is no longer constrained by the bounds of this present reality and is free to visit his favorite place anytime he desires 🙂 I think maybe I could feel his presence galloping along the hillsides as I made my way back to the truck. 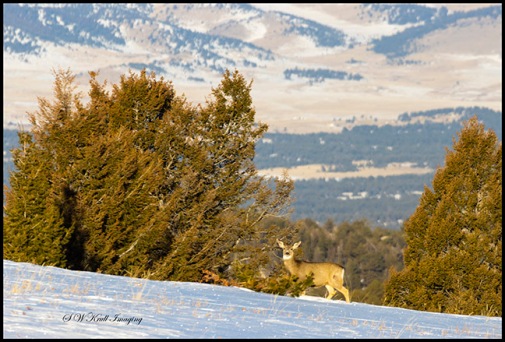