Was looking forward to a couple of days of photography in the pleasant Rocky Mountain springtime weather… until I looked at the forecast. Snow starting today and continuing all day tomorrow! Figured whatever hiking I was to get in was going to have to be early today and then that is going to be it until next week 😦 So the plan was set… off to Woodland Park for supplies and the rain forest trails on the north side of the high walls of Ute Pass. 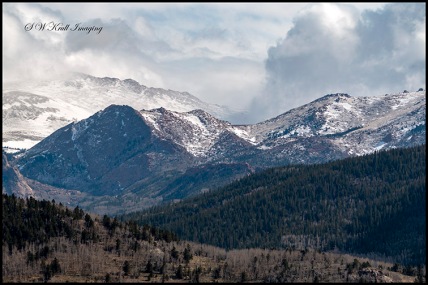 As we crested Victor Pass I could see that the weather was already in full swing on Pikes Peak with fresh snow on the summit and storm clouds and fog rolling in. It was a beautiful scene though, made all the better with a circular polarizer on my 100-400 Canon Zoom.

When I neared my intended trailhead in Woodland I could see that as hoped,  there were mule deer running around all over the place 🙂 Me and the big dog dismounted my blue Dodge and headed into the pungent atmosphere of the beautiful springtime wilderness. It wasn’t long before I spotted a herd of deer, unfortunately they also spotted us. They quickly moved away from the trail, but stopped a few yards into the woods to see if we were actually going to pursue them. When they discovered we weren’t they just stopped and  and kept a wary eye upon us. One of them I see is a buck just starting to grow antlers for his battles in the autumn rut!

I snapped a bunch of those guys… due to the dark gray clouds above I was forced to use ISO 400 which I would rather not have to do at a distance. I’m really happier with the detail I capture at ISO 200, but I figured I was going to need at least a 200th of a second for a clear picture!

It wasn’t long before I started to see snow flakes beginning to fly so I had to cut the hike short and finish the supply run. Now the snow is falling steadily but we are back home safe and sound ready to just watch the snow action from in front of my computer screen!