The weather has been miserable for photography these days, haven’t had my camera out in over a week. Summer is pretty rough for taking pictures in the mountains. Between the intense sun, haze and later on smoke unless we are very fortunate the mountains are barely visible. The wildlife spends the warm lazy days lying in the shade in the highest elevations, coming out only in darkness to forage for food.

Which got me to thinking about winter and my favorite activity, snow shoeing 🙂 I was recalling this photo shoot… the snow was just coming down so hard for several days without a break, we were just buried under several feet of snow. So much snow in fact that the wildlife was having difficulty moving around to get food. That year there was a herd of deer trapped in the mountains that was surely going to starve to death without assistance. The Wildlife Service was going to abide by it’s strict no interference policy and just let the animals die until there was a massive outcry from the public and they were forced to relent. Bales of hay were finally airlifted by helicopter to rescue the stranded animals, but the public was strictly forbidden to take matters into their own hands in other affected areas. Fortunately Coloradans are generally rebels and no one listened to the authorities, saving many animals that would have perished.

I lived a short distance from a game reserve where someone had delivered a couple of bales of hay to our beloved herd of deer, but unfortunately the snow was so deep that they could not get to it. Since I walked that forest every morning looking for pictures for my stock photo business I knew the area like the back of my hand, including each and every game path throughout the entire area. So I got the idea to put on my snowshoes and pack down their paths so they could move around. The snowplows had been by once so the snow on the street was only about a foot deep and getting to the woods was pretty easy. However, once I hit the deep snow it was an entirely different story! But I persevered, diving into the waist deep snow with short steps so that there would be a good solid path for the animals. I remember the snow getting deeper and deeper until I was struggling through chest deep powder gasping for air and having to stop and rest after only a few steps. My snowshoes would plunge almost all the way to the ground and then become covered with all the snow on top of my feet. It was all I could do to lift each foot out of the deep trench for another step. For a while there I thought I was going to spit out my lungs! 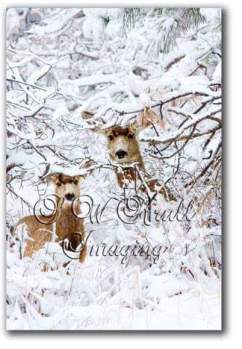 I could see the deer in the mist, looking on curiously. They were quite used to me walking through there with my camera so there was no alarm and they didn’t try to run. Mostly they were hanging out under the thickest trees to avoid getting buried while they slept. I of course had brought my camera, well protected by my Aquatech rain cover, in case I could get close enough to the deer to get some pictures. Multitasking I guess it was 🙂

And indeed, I did get some of the greatest deer in snow pictures that I have ever managed to obtain! At one point I was struggling to get through some snow and brush when I burst into a clearing and found these three beautiful ladies staring at me like, “Hey, what’s going on?” I also found a few more cuties just hanging out, eating the bark and leftover leaves on the ubiquitous scrub oak trees prevalent in that area. 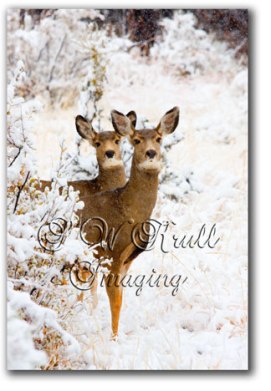 Most gratifying of all though was the sight of the deer beginning almost immediately to use the pathways that I had created for them 🙂 They seemed very grateful for the assistance and I was grateful for the opportunity to have done my part in the great effort made by fellow Coloradans to spare the animals from great suffering. In fact it worked so well that I made it a habit from then on to don my snowshoes and keep their paths clear for the rest of my remaining time in the Parker area. It is now one of my fondest memories from my time life there 🙂