Winter was supposed to come early to southern Colorado and Cripple Creek last night… we got a little snow and some cold but the worst of the storm came in the form of some very dense and treacherous fog for anyone trying to drive through the darkness. It did make for a beautiful night in downtown Cripple Creek though with the lights of the casino district glowing softly through the snowflakes drifting lazily down from the frozen mountain air.

Often after one of these storms the action in the mountains the next day can be breathtaking. I awoke early and the doggy was ready for a hike so I decided to see if I could make the top of the ridge behind Little Grouse Mountain where there might be a good view of both the Sangre and the Collegiates. It has been awhile since I have hiked that far but I thought it would be well worth the effort in pictures if I was right. 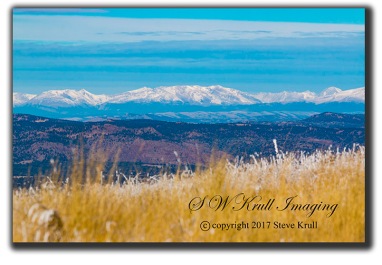 top of the ridge. I didn’t even know if there was going to be a trail up there but pressed on anyway, ghostly trees in the shaded valley below created an amazing wintry scene. About a half hour in I was at the base of the ridge and there was a faint wagon trail calling my name, leading up and around to the top. Have to say it was a tough climb after a month or two of taking it easy, a fourteener in the immediate future may not be in the cards! Looks like there might have been some gold there at one time, it appears quite a few of the original explorers decided to stake mining claims there. Only the ghostly remains of their hopeful efforts are visible now, a few rocks and some caved in digs. 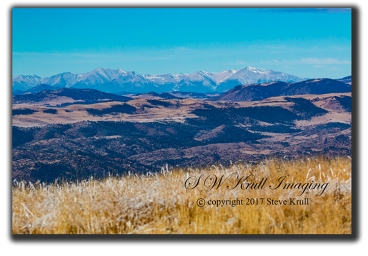 Finally we reached the summit and the view was indeed magnificent, the Sangre to the south and the Collegiate Peaks to the west. Looks like the Collegiate Peaks have been getting a bit of snow already, not so much further south. The remnants of last night’s fog filled the high plains between Victor and the Sangres, exactly the panorama I was hoping for :)

My legs are tired and sore and the dog is contently sleeping as I process the pictures and recall the beautiful morning. These images are but a couple of the pretty good sized batch I was able to capture this morning. Please be sure to visit swkrullimaging often so you don’t miss out on the wealth of imagery I have been able to acquire this fall!