It was a good morning on the mountain. Pikes Peak was putting on a great show and I located the deer herd again. What made it especially great is that I actually made it out the door. A brief foray into the “Wildlife Professionals” forum had me fuming with anger and my spirit drained. It was all I could do to tear myself away from the computer.

I joined the forum thinking that there would be wildlife photographers, activists, veterinarians, animal rescue personnel and scientists.  I had shared my Examiner article on the poor success rate of archery in the pursuit of big game and was unpleasantly surprised by a barrage of hostile hunters and professional wildlife extermination personnel who having not even read my article, went on the attack. What really drained my spirit is the mentality of these people. Joe implied that the only reason I was against bow hunting is that I didn’t understand how it works. Of course he was only too happy to fill me in, gleefully stating that “Arrows and broadheads cut and animals die by hemorrhaging to death. “, as if I would somehow suddenly understand and declare bow hunting to be the most humane way of treating wildlife. Bob is incensed that I would even care how the animals are treated, stating ” Personal, ethical and emotional arguments have their place, and some, their validity. Just not here.  “, as if owning a gun and a hunting license somehow exempts him from the ethical expectations placed on the rest of society.  Troy thinks photographers are ignorant, and Joe implies watching an animal crumple into a dead heap gives him the same thrill that a photographer feels after snapping a great image. Carl, using a profile picture of Bruce Willis instead of himself, thinks art is not worth the carbon footprint it leaves behind. While mouthing off about how good it made them feel about sharing the thrill of hunting as their ancestors did as if our barbaric ancestors had some kind of special insight into life, I was told that my personal feelings about wildlife and pets had no place in their forum. Apparently feeling good about mayhem and death is OK, but feeling strongly about non-lethal wildlife enjoyment is not. While offering no scientific studies to back their beliefs, they attack the science that disputes their own opinions. Seething with anger, I wanted to unload on these Neanderthals, but before I could somebody reported me for an inappropriate post and shut me up. They think I am against hunting, but actually I am just against the mentality of people who think like they do.

So it was with great difficulty that I pushed away from my laptop, laced up my hiking boots and headed up the trail. My diligence was rewarded with the fabulous show the mountain was putting on this morning. Clouds and fog were streaming out of the blazing blue sky, clothing Pikes Peak in a robe of white mist. The deer herd was on my trail foraging for food and enjoying the morning sun. The chirping of the birds and the sound of the morning wind in the pine trees soon melted the anger from my spirit. The joy of spending time in the midst of the deer herd once again brought me close to God. It was then that I realized…  Hell cannot follow me here. 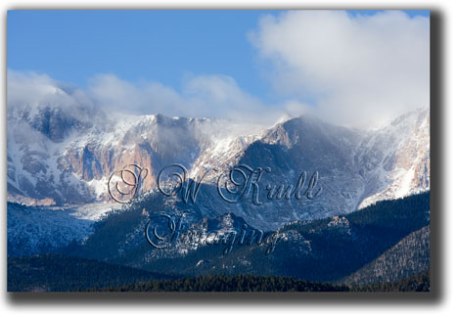