Admittedly, Tincup  is a fairly minor tick on my bucket list, along with a number of other Colorado ghost towns that I would like to visit 🙂 It wasn’t even the main reason for visiting that part of the state this week… but what the heck, we were there and why not?

The main reason for the journey to the other side of the big mountains was the quest for a picture of moose in the wild. Kevin and I were told that moose hang out at Taylor Reservoir all the time. All we had to do was show up and moose would be flocking to us for the sheer joy of having their picture taken 🙂

So I awoke at 3:30 a.m. so as to be able to reach the other side of Cottonwood Pass by sunrise, when we knew we would have the best lighting conditions with which to photograph the numerous herds of moose that we would surely encounter. Alas, it was not to be so.  Just as with our previous fervent attempt at a moose picture on a difficult trek to Hartenstein Lake on the other side of the pass when the moose showed up a day late, we saw nothing 😦 With all the smoke from the fires, the rugged Collegiate Peaks mountains weren’t even an image worthy target. 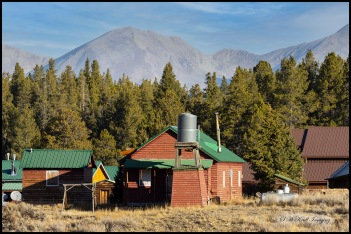 With nothing better to do we proceeded down the eight mile dirt road to the ghost town of Tincup. According to undercovercolorado.com, the town got it’s start as a mining town in 1880 as the mining town of Virginia City, however confusion over three towns in three different states with the same name resulted in reincorporating the town as Tincup in the year 1882. Eventually the mines were exhausted and the town had pretty much died by 1918, when the final official election was conducted.

The rough dirt road led to the tiny picturesque town of few inhabitants where we found the best location to grab a few frames with the magnificent San Juan mountains to the west. That took all of about five minutes and then we were off to the Taylor Park Trading Post for a look around followed by one last effort to spot a moose in the marshy area adjacent to the water.

Seeing none, we headed back over Cottonwood Pass in hopes of spotting a mountain goat or a bighorn sheep in the thin air of the 12,600 foot byway over the Continental Divide. Again no luck on the pass, leaving Cottonwood Lake as our last chance to acquire the coveted large mammal images. As we descended down to lower elevations fog began to thicken and even though there were no critters in sight, fog on Cottonwood Lake looked incredible was pretty cool 🙂 Finally, a few images for the blog post!

Here we decided to call it a day and head for home. Little did we know that our luck was about to change on a detour to Eleven Mile Reservoir. But that is a subject for another blog post 🙂