Do or Die… my most lucrative time of the year, autumn in the Rockies. Today was my first full day off in the midst of peak aspen leaf season and so far I have made the best of it.  Woke up early and took off for the trailhead with Big Dog. After a short analysis of the situation I decided on the polarizer to add some drama to the bright clouds and sky. Not too much of great autumn interest along the trail today, was kind of hoping for a deer or elk as a subject, or maybe a neat shot of the mining equipment against some golden aspen, but no such luck. There were a few trees changing in the direction of the Sangre de Cristo so I tried a couple of captures in that direction, time will tell if it was worth the effort.

After the hike we were off to the Goldfield mine fields where there was one nice view of a series of abandoned mines in the midst of a colorful aspen grove. That turned out to be one of my favorites of the day 🙂

Then it was off to an unofficial overlook at the top of Victor Pass for a view of the north face of Pikes Peak. Upon arrival there I was surprised to see a lineup of ladies in lawn chairs and umbrellas… looked like a picnic might be in the making! Turns out they were the local Cripple Creek painting club on scene to paint the magnificent view on such a beautiful morning. Lol, I needed to get in front of them to get the shot I needed but was hesitating… the ladies assured me that I would not be accidentally painted into their pictures if I quick jumped in for my photographs… Which cracked me up because for a second that exact thought crossed my mind! Guess I’m not used to seeing painters at my scenes 🙂 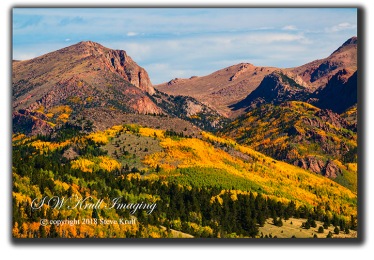 After that I decided on the loop behind the Newmont mine to see if maybe the aspen were in peak form at the top of that pass. Looks like the trees in Cripple Creek are going to need another week or so to reach their full color so I didn’t bother to stop, deciding to hurry home to process the ones I already had.

Tomorrow will be a much bigger day… planning to leave the house by 4 a.m. to make Rocky Mountain National Park by sunrise. I will hit Bear Lake first I think to capture the sunrise on the lake, followed by an attempt at seeing some wildlife in Morraine Park. From there I hope to drive Trail Ridge Road followed by some more wildlife viewing on the west side of the park at dusk. Also hoping for my first visit to Fontenot’s Restaurant for some blackened catfish… back in the day the wife and I used to make a special trip up to Winter Park just for the pleasure of a meal at one of my favorite places 🙂

After that, who knows? I still have my sights on Quandary Peak in hopes of bagging at least one 14er this season! I would also like to make it up to Twin Lakes and maybe some fall colors along the river along the bottom of Independence Pass. Anyway, stay tuned, I’m just  getting started 🙂

These pictures and more are available on my image website as wall art on glossy metal and acrylic sheets, wrapped canvas, traditional frames and matting and as art on many cool and handy household and gift items, including battery chargers, apparel, beach towels, greeting cards and more!