Well that certainly turned out differently than I had planned. Got in the truck to go to my sunset spot when I heard a very unnerving noise coming from somewhere so I promptly parked and gave up the idea of sunset pictures tonight. But from my house I could see a hint of a good sunset and a possible view that I hadn’t noticed before. So I just started to hoof it down the road to see if I could maybe salvage some sort of successful evening. 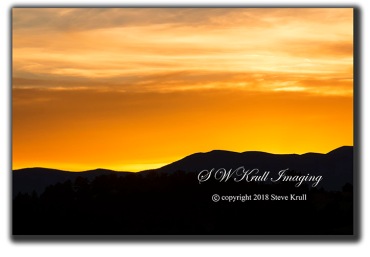 Sunset over the Sangre De Cristo Mountains of Colorado

Well as I got closer to the view I was eyeing, I noticed that I might get a better view from a nearby dirt road so I set my sights on that. However as I neared the road the sun began to set and walking turned into running and before it was over I had covered a couple of miles on foot, and had to negotiate my way around a particularly difficult cattle guard that I could not get the dog to cross one other time when I was walking down this way.  Fortunately when I got to the dirt road I was able to see the Sangre De Cristo range  and maneuver into places where there weren’t power lines and buildings in my way 🙂

I wound up with no tripod and no remote release, but I still managed a few good captures at f11 before the color began to fade to darkness and I headed back down the hill where much to my amazement there was an impressive sunset scene going on over the town and over the big gold mine. I scrambled up the hill on the other side of the dirt road and steadied my camera on a fence post while getting my coat caught on some barbed wire. But I got the shots and as I am looking at them I am also noticing that there is a view of Pikes Peak in the distance from near my house. 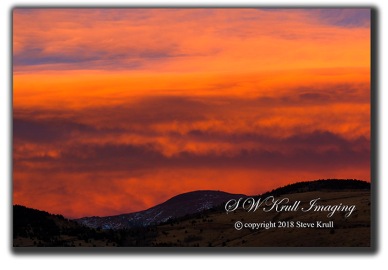 Well anyway, the evening was definitely not according to plan, but I got some shots and learned about some new spectacular views that I can walk to if need be. And I also found a way around the cattle guard so that I can bring Big Dog with me up the dirt road in the mornings when it looks so pretty over in this direction. Now my legs are exhausted, my arms are even tired and it is definitely time for a Fat Tire that I wisely purchased before all the trouble started 🙂

2 thoughts on “Not According to Plan”