Woke up this morning stressed out about all the things I still need to do this summer but couldn’t really remember what it was that I should be doing. So I had my coffee and waffles and by 7:30 I still couldn’t remember what it is that I was stressed out about doing, so I just let the two outdoor kitties out the front door and pulled a chair into the awesome Rocky Mountain morning sunshine to ponder the matter. No sense rushing headlong into something when you don’t even know what it is yet!

So as I sat there sipping my coffee I reviewed all the things I had originally intended to do this summer and as I did so it occurred to me that I had already done all that I wanted to do and more… Including a few things that just six months ago I could not have even imagined would be possible. Of course this sounds good on the surface, but it caused a bit of a panic at first because I suddenly realized I didn’t know what to do next! As I thought about it I realized that through all the doctor appointments and cancer treatments I had forgotten how to live a normal life. I had to think back a long way to remember what a summer Saturday might have been like before all this happened. Flipping burgers on the grill and enjoying a margarita was the memory that fought it’s way through the fog of years of hardship to the forefront of my memories.

Amazingly enough as I fixed my gaze on the yard, that very same propane grill that was in our backyard in Parker has been preserved unscathed through it all, full propane tank still attached. No flame has passed through those burners in at least five years but much to my surprise it only took a couple of punches at the starter button to produce the bright yellow flame that I was hoping for. My afternoon was sealed and an odd feeling of peace that I have not experienced in a long time settled in.

But what of the morning, there were still hours to go before lunch time? I have been thinking a lot of the Thomas Trail in Green Mountain Falls. It was one of the first trails we hiked together when we first moved here. Sweet Pea had learned how to climb in the Miata and curl up on the floor when we drove to work and she quickly learned that she was going to get to have some fun on the way with a climb and a stream crossing on the lush forest trails in GMF. For the three of us our longest hike was the Thomas Trail which goes across the front of the mountainside from the Catamount Falls to Crystal Falls and I have been wanting to go back there to stitch one more good memory from the past across the gaping wound of loss to the present. 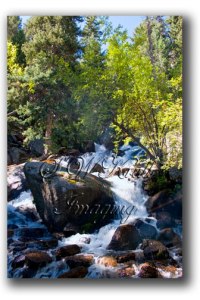 So I corralled the cats into the house and loaded up the camera and a bottle of Gatorade and headed for the trail. Unfortunately, the river was running so high this morning from all the rain this year that I didn’t want to cross the stream, but Plan B was still a go with a climb to the Garden of Eden to check on the alleged wildflowers, It was a good climb, but it appears I am too late for the full bloom in that meadow. But I got some exercise, some great shots of Catamount Falls and had a good time whiling away a few hours. As it turns out, I have not lost my grilling skills and had a great afternoon of Grillin’ and Chillin’. And now as I write this evening, the wound of loss now has another stitch towards healing.

This evening an old buddy of mine that I haven’t seen in a long time stopped by with news that he is moving to Cody. I’ve been thinking a lot lately about the wildlife in Yellowstone, especially the wolves. He just happened to have an extra travel packet for me. A sign perhaps?