I have been trying to go to some new places and do some new things, so this morning I headed off to Victor for Gold Rush Days. A quick jaunt down Highway 67 with a jog to the left as you near the turn towards Cripple Creek for the once a year festival commemorating the old west gold mining days.

However as I neared Victor I started to notice that the area looked familiar. Then a road sign, Historic Goldfield, Colorado. Then it all came back to me. Some twenty years and change ago Tricia and I had both gotten new cameras. Auto Focus SLR’s were taking hold and I went for the Minolta 700 si (superior intelligence) I think was the deal. She didn’t want to mess with lenses, so we got her the Pentax zoom 105 or something like that. Still have it somewhere. The project was autumn gold and we were trying to get a picture on the cover of some phone book or directory or something so we took the trip down to Cripple Creek trying for nice gold mine pictures. I didn’t realize it was the same place though because we had taken a dirt road over from Cripple Creek back then and this time I just went on the county paved road.

Well anyway, I saw the place and was remembering the day and waited for the sadness to set in that so often accompanies a memorable moment from the past. The sadness didn’t come however and as I drove past the gold mining area I was enjoying the fond memories from our photography projects that we used to do. I thought I might stop by for a few shots on my way home as I continued on for the next mile to Victor. 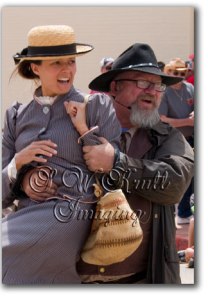 Much to my surprise I ran into a number of Woodland Park friends at the festival that also had the same idea. It wasn’t a huge event that far out in the boondocks, but it was a good time. There were mining activity contests like stake pounding and ore shoveling as well as live music and old west skits on main street. I had not intended to stay long, but I was a bit enamored by the costumed story telling lady who was introducing the old west skits. I thought she looked awfully cute in her old west bonnet, either that or I was just born 200 years too late 🙂

After a couple of breakfast beers and some great BBQ I decided to head for the gold mining fields of Goldfield for some reminiscing and a few shots for the story I am going to write for the Examiner. Much has changed in the two decades since I was there last. When we originally found the place there was nothing there but the old mines and a deer trail winding through the acres of old mining claims. Oh that and a sign that said Extreme Danger or some silly warning like that. Actually I was a bit worried about cave ins and buildings collapsing but Tricia wanted to climb right up in and look around. I still remember saying, “Are you nuts, this place is going to fall down!”. She said “Oh it is not.” and eventually talked me into coming in and looking around. Now there are groomed paths, and fences everywhere. There are also little stations with signs giving historical information on all the mines and some nice benches to sit on. So I wandered the acreage repeating the long lost photographs from our film photography days so long ago. My first few shots weren’t turning out to well and upon inspection I noticed that my lens was all messed up. I know I checked it before I left and it was clear. Perhaps I fogged it up taking the pictures of the story telling lady in the bonnet 🙂

As it turns out, the story gets more interesting… About the time we did this project the internet was in the early stages of actually becoming useful and I was toying with putting our photography on a primitive website. These were some of the first images that I scanned and posted. It wasn’t long and I received an email from a guy in Norway who recognized the area from pictures that his grandfather had sent back in the late 1800’s or early 1900’s. The guy was excited to find out where the mines were and so we were able to help him discover part of the journey his grandfather had taken trying to make his fortune mining for gold in America.