Took advantage of the big spring snowstorm to get in a snowshoe hike. If you count a Colorado winter as the months from September to May, this was almost the first year since I began snowshoeing a decade ago that I didn’t go at all. I was pretty sure I was going to miss the entire season until this morning when I awoke to another eight inches of the white stuff. 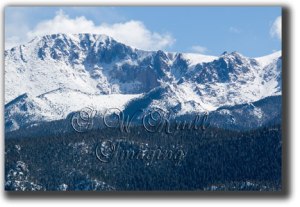 I can still remember the trip to EMS to purchase our first snowshoes. The previous winter our dog had gotten some sort of strange blood disease and had to go to the Aspen Park Vet Clinic every day for something like two weeks and spend the entire day for testing and treatments. So I would drop him off and head over to Meyer Ranch for a trail run before heading off to work. But the snow season was getting underway and soon the snow was too deep for my running shoes. By then I was hooked on winter trail running and was seriously wanting some snowshoes. But winter came to an end in the front range and the idea was shelved for the summer.

Then came the huge winter snows of 1997. Three feet of snow in October buried my running trail in my woods near Parker. Just as it was beginning to melt, we got a couple more feet on Thanksgiving. I knew that wasn’t going to be melting anytime soon, so I jumped at the opportunity to get the snowshoes. Tricia thought it looked like so much fun that she wanted some too. So every morning I would head out into the darkness for a couple of hours to romp through the woods, and then again when I got back home for some more exercise with Tricia and Bear, who still liked to go walking, but wasn’t able to go running with me anymore.

So an entire winter with no snowshoeing had me feeling pretty low.  Every year I had managed to get in at least one snowshoe run, so this morning when I saw the snow I knew I would have to get it done. The snow was so deep I just sat in my chair in the front yard and strapped them on, which turned out to be a mistake because the snow was already melting furiously on the streets and I had to walk in the ditch all the way to the trail. Once on the trail I could really feel the year of inactivity. On the steep climb to the first level I thought I was going to spit out my lungs, but I survived and the view of the snow covered north face came into view. It wasn’t that great, but by the time I got to the trail back down some more interesting clouds had moved in. The trip down was a lot more fun than the trip up the mountain, with some snowshoe skiing down the switchbacks and a deer that came to see what I was up to.

It was a great time despite one face plant and one shoestring turned into a giant ball of ice from the melting and freezing that was going on in the shade of the pines. And now I can still say I haven’t missed a year of snowshoeing since I started, for whatever that is worth.