Today my heart and mind is with the wolves as a new hunting season begins. After being hunted, trapped and poisoned nearly to extinction during the previous century they were saved by the Endangered Species Act and efforts to save them converged upon Yellowstone National Park as new packs were introduced into the wilderness. However, just as they were beginning to thrive, the Bush administration removed them from the list. 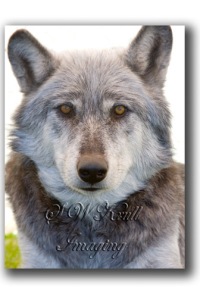 Apache the wolf ambassador from the Rocky Mountain Wildlife Foundation in Guffy, Colorado

Now, hunting and trapping have resumed with the mindless hatred and ferocity that nearly permanently removed them from the face of the American landscape. Barbaric trapping and hunting practices that would result in felony animal cruelty charges and prison time for the normal citizen are supported morally and financially by the states that promised the Bush administration that they would develop responsible wildlife management plans. These magnificent animals are trapped with barbaric leg hold traps and left for days to suffer in the elements without food or water. In Wisconsin, hounders are allowed to unleash packs of dogs to rip wolves and their pups apart in vicious encounters that often leave dogs dead as well as the wolves they are pursuing. The government encourages it and even reimburses the so called hunters for the loss of their dogs. One famous rocker and gun rights activist advocates shooting the wolves in the stomach with a .22 rifle to prolong their suffering.

I have recently met a new group of online friends who are doing something about it. They are taking the fight for these noble animals to the doorsteps of the capitols in the states where these sadistic activities are advocated. They say “The pen is mightier than the sword.”, so I will be using my digital pen to raise awareness of this group’s activities to win the hearts and minds of citizens in these states. Perhaps together we will be able to bring about change and once again save the wolf from destruction. Subscribe to my S. W. Krull Imaging Examiner news feed to receive free coverage of our fight for the wolves.