I know it is going to be a good morning when my boots are the first to make tracks in fresh snow. There is something irresistible about being the first after a snow to experience the crunching of snow beneath my feet in the total solitude of the Rocky Mountain wilderness after a snowstorm.

The combination of fresh snow and the new light of spring hitting the north face of Pikes Peak was too inviting to pass up, even though I knew the morning would be cold and windy. I was not disappointed. The mountain was bathed in a beautiful new coat of white and the wind was whipping up clouds of snow in the dense pine forest below me. The beauty of the scene gave my legs the strength to climb the upper loop on my trail in hopes of finding some deer or elk foraging for food at the top of the ridge. The trail on the ridge was slippery so I had to pay close attention to my center of gravity and make use of the scrub oak branches to keep from turning the trail into a ski slope.

I didn’t find any wildlife to photograph, but the view of the peak was breathtaking and the fresh mountain air exhilarating. The shadows on the snowy ridges formed by the early morning light made for interesting subject matter as did the snow blowing around in the trees. I considered taking the lower loop past the burned out cabin back to the caves to search for the deer herd but decided against it. That place gives me a creepy feeling and I avoid going there.

It is now evening and the snow has already melted. However, my memories and the beautiful moment in time have been preserved in silicon for me to relive tonight. 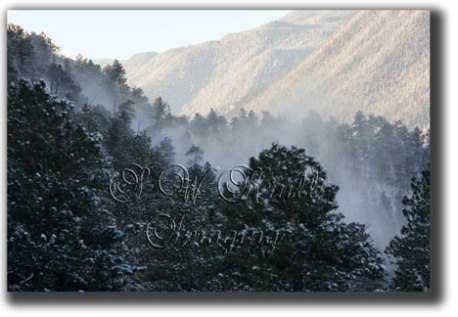