Another glorious day in the canyon yesterday. It seemed like it was going to be a cool cloudy day for the ride up to the bighorn sheep so I went ahead and wore my coat, something I would come to regret later. We were only about a mile up the canyon when the sun came out and it immediately became apparent that this we going to be a day that was more fall than winter.

About a mile and a half into our ride we came across a lone ewe just lying lazily beside the road, a good sign for sure but we decided to pass her by to look for better action further upstream. Soon we came upon a good sized herd lounging near the Marston Dam and we decided to stop and watch them for a while. There was one big ram, a bunch of ewes and lambs and a couple of young rams all milling around, some eating, some lying down and a couple of the rams showing mild interest in the ewes… after all this is still the rut season! But every time it looked like the herd was going to get up and do something interesting a few would wander around and then just lay back down, a theme that would be repeated all day long. Eventually we decided to ride on upstream and search for a more active herd. 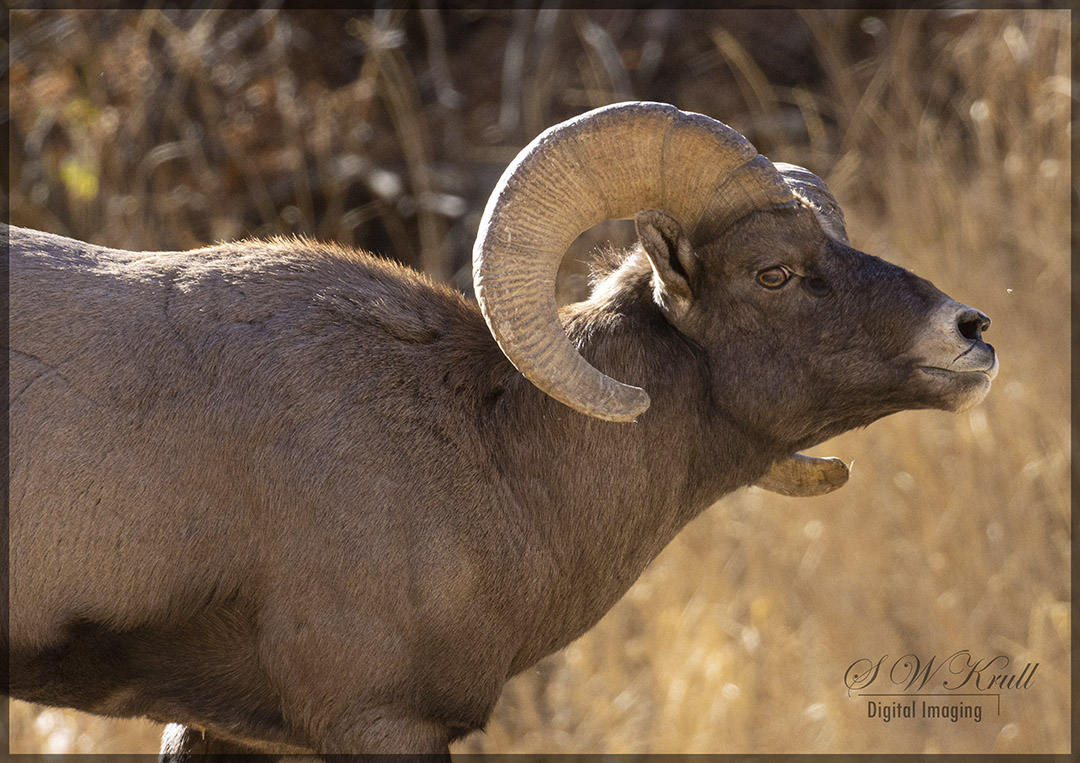 As we rode upstream I spotted a lone ram climbing up from the river. Soon it became apparent that this ram was nursing a leg injury and a good look through the lens revealed that this was our beloved “Scruff” and he has apparently suffered a terrible injury, a hind leg broken at the knee joint. It was badly swollen and useless for walkin, but he slowly made his way upstream along the dirt road. Later we found that he had sustained this injury a couple of months ago and that it was much improved from what it was before. He hasbeen able to continue eating and has been seen climbing mountains, crossing the river and even engaging in a fight or two. I hope he continues to improve and will someday be able to use that leg again. As we chatted with our favorite ranger Joe at the dam Scruff eventually made his way up the steep mountains to the north into the high pasture where the bighorn like to spend their nights.

There were no more of the great beasts upstream so somewhere well past the main dam we decided to turn around and go back to the herd we were watching before. They were right where we left them, enjoying a lazy day in the early winter Colorado sunshine. I did my best to watch for interesting pairings and groupings as the sheep interacted, knowing that I wasn’t going to get the kind of dramatic imagery that I’ve become accustomed to beside the beautiful colorful cliffs of the magnificent canyon. In some ways I’m just fine with that though, sometimes during the rut the antics of 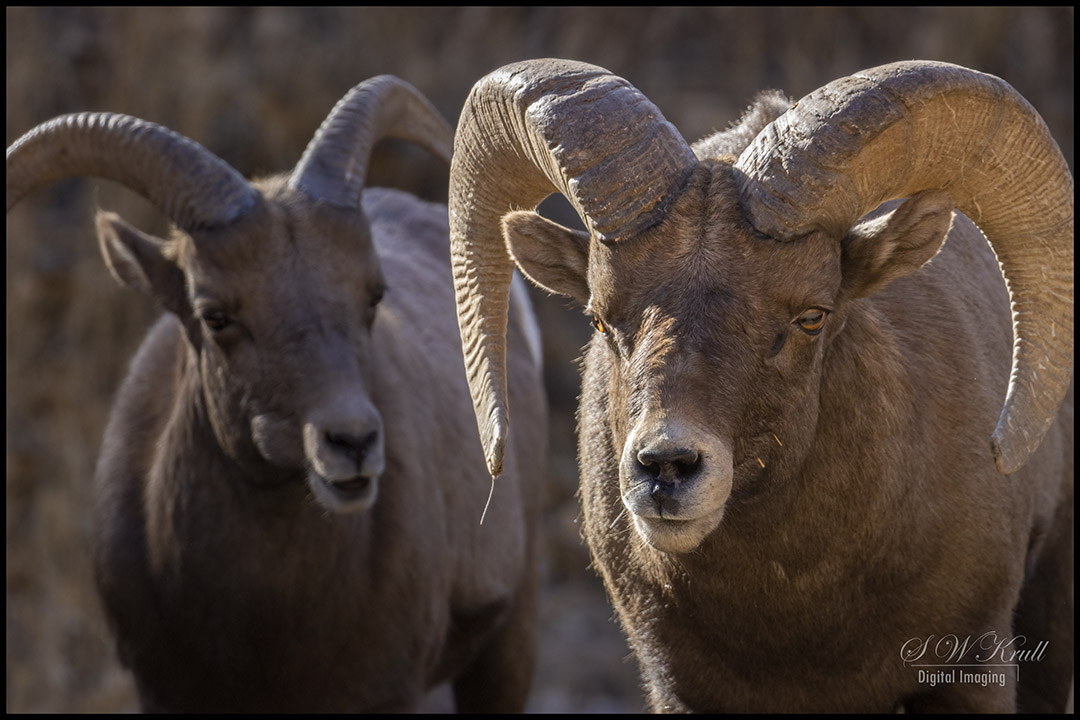 the males chasing the females around on the cliffside is just plain dangerous! I would hate to see one fall and get hurt… we have seen the aftermath of some bad falls and it isn’t pretty 😦

As for camera settings the light throughout the day was fairly consistent so I just left my camera on shutter priority with a shutter speed varying between a 640th and an 800th of a second. My aperture was stayed around F8, which was my maximum since I was using my 1.4x converter. I did have to fiddle around with the exposure compensation a bit depending upon the cloud cover, and now looking at the images on the computer I can see my strategy paid off! I hope you enjoy the images and be sure to check and follow my Instagram account where I will be displaying many more!

As always, the best of these images and hundreds more are available for purchase on my website as wall art on glossy metal or acrylic sheets, stretched canvas and traditional matting and framing. Tons of cool household and gift items are also available with any image you like including coffee mugs, t-shirts, blankets and pillows, battery chargers, phone cases, stationary and much much more! Just click on any image you like and all the choices, sizes and prices will appear! For my viewers interested in images for commercial use, please visit my image licensing portal! Also, if you would like to see a more complete record of today’s images please follow my Instagram account!

Many of my adventures have also been captured on beautiful HD video on my Youtube Channel! If you enjoy my content please subscribe to my channel, subscribers have a big impact on channel rankings!

This post is not sponsored and all equipment used in it’s creation was purchased by me on my own volition.