The plan for the day was to capture bald eagles in flight… Eleven Mile Canyon looked like the most likely place for that to happen. A high wind warning looked to foil my plan, but as it turned out the wind in the canyon wasn’t nearly as ferocious as  the wind out in the high prairie beyond the southern Colorado foothills. 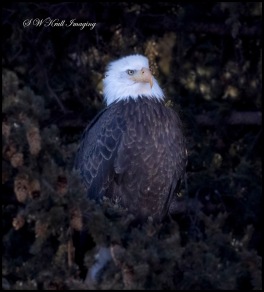 I didn’t spot my first eagle until I was probably six miles into the canyon, a handsome fellow standing on a branch in the shade high above the South Platte River. Unfortunately he was in a terrible location  for a photograph so I decided to just shoot a bit of video, and a bit was all I was going to get. Seconds after getting out of the truck the great bird took flight. I was able to capture a few seconds of his flight before he disappeared around the bend.

I drove upstream a mile or so and then decided to turn around and look for the original character.  Again, I found him in an impossible location for photography, on rivers edge with the sun directly behind him. I did my best and bagged a couple of captures before he moved on to his next location where finally he had found a place in perfect morning light

Eventually the raptor took flight again and by this time the hour for soaring high into the sky had come, there would be no more closeup imagery on this day. So I decided to drive  back to the entrance and check on the nest that one of the two eagle pairs residing in the canyon calls home. When I arrived the female was in the nest, obviously disturbed by a couple of crows circling over her. Normally the eagle mom has a great amount of tolerance for the smaller birds but now with nesting season drawing near she has run out of patience.

She left the nest and chased the smaller birds with vengeance. The had no desire to take the eagle on and quickly left the area. I took that as my cue to call it a day, the wind at the canyon entrance was horrendous and I was certain all the eagles would be hunkering down until the windstorm was over.

At each stop I captured a little video, enough to make a nice record of my day, I hope you enjoy it! Please take the time to subscribe if you enjoy my work and it will also really assist my channel to grow if you would also hit the thumbs up button!

2 thoughts on “Flight of the Eagle”