For the second time this week I failed to find the eagles fishing in their usual spots upstream. I saw one flying high overhead on a fast track to somewhere else, but no eagles were perched on the dead trees along the banks of

the South Platte in Eleven Mile Canyon. I was considering a second run up the six mile road but thought I’d better check the nest at the entrance to the canyon before making another wasted trip.

Sure enough, the instant I passed the ranger station I spotted a bright white head in a tree along the river bank below the dam. I immediately pulled over and tried a couple of shots but he was simply too far away for a usable picture. When I pulled into the lower parking lot I spotted the second eagle and before I could get ready they were both in the air and unfortunately I missed the dive into the clear calm water for a fish. By the time I was ready to shoot, both of our nesting pair were back in the nest.

I decided to wander down to waters edge where I spent so much time last summer to see if I could even get down there through the snow, and also to try to get a better and closer shot. For some reason the snow has melted there and turned into a thick later of ice but I carefully stayed along the edge where it wasn’t quite as slippery and made my way down to the water. Much to my surprise the river has completely thawed at that spot in the river, and also above the dam where the osprey like to fish when they are not at their winter location south of the equator. I was fully decked out in my warmest winter gear today, expecting another brutal ordeal in the arctic wind tunnel, but as I stood on the banks of the river in the bright sunshine it actually felt like spring. I am so looking forward to the return of the osprey! 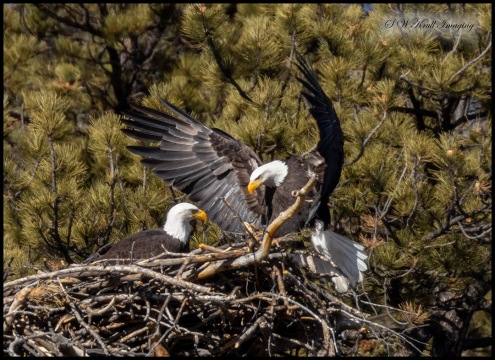 Fortunately for me the eagles were quite active today… they are busy adding on to their nest as they get ready for the hatching season 🙂 I assume it was the father eagle repeatedly flying over the hill out of sight to hunt for and bring back a stick for the nest. He would give it gently to his mate who would then carefully place it in the necessary place in the giant nest. After a bit papa eagle would make another trip and return after a few minutes with another prize. I was able to capture a few shots of him in the air and a couple of nice ones of them together on the nest, these being my favorites of the batch.

I was also able to get this nice video footage in which you can hear the eagles talking to each other, they seem pretty happy about the beautiful day and spring on the horizon 🙂 I hope you enjoy it 🙂

One thought on “Eagles Preparing for Spring”