Today was the day… the day we’ve been waiting for with great anticipation for weeks! The eaglet has finally taken flight 🙂 And even better, I was there with the camera to capture it! The little guy has been spreading his wings for a while now, gaining altitude above the nest, flapping his wing sand working up the courage to actually leave the nest and go out on his own 🙂

The youngster left his nest early this morning and made one good pass showing off as if he knew I was there watching. 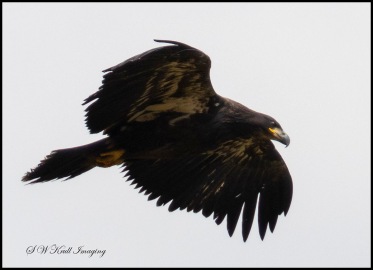 He then swooped in low to land on a boulder across the river. He remained there motionless until a deer went running by and startled him into flight again. This time he flew directly in front of me just on the other side of he river and into a thick area of pine forest, out of sight and out of range of my camera. I remained on the river bank for about an hour hoping he would take flight again but unfortunately I didn’t see him again today.

The adult eagles were not to be left out of the action either, they were flying around swooping low and flying high, as if they too were celebrating the youngsters success! I did my best to take it all in with the camera but they were really moving! Not an easy task to stay on target with a long lens, and unfortunately the lighting was not all that great 😦  After putting on a good show they picked their favorite pine tree high on the cliffs for a perch where they sat motionless, side by side like the two love birds that they are.

Eventually I decided to take a little hike up the canyon to see what the osprey were up to but not much was happening, looks like I’m going to need an earlier start if I want to catch the best light and the most action in the canyon! I made the best of the little hike along the South Platte by shooting a couple images of the landscape and the whitewater which I have uploaded to my website… and also there was a cute little chipmunk who decided to entertain me for a little bit while I watched the osprey nest. 🙂 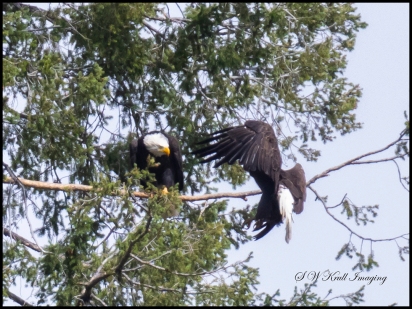 As always, the best of these images are available for purchase on my website as wall art on glossy metal or acrylic sheets, stretched canvas and traditional matting and framing. Tons of cool household and gift items are also available with any image you like including coffee mugs, t-shirts, blankets and pillows, battery chargers, phone cases, stationary and much much more! Just click on any image you like and all the choices, sizes and prices will appear! For my viewers interested in images for commercial use, please visit my image licensing portal! Also don’t forget to check out my YouTube channel if you want to see some of  my adventures in action!