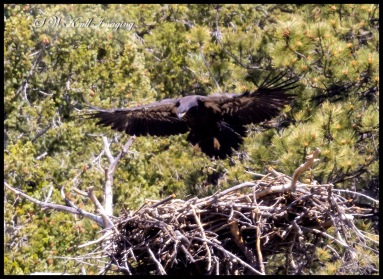 As the caffeine from my morning coffee began to revive my brain, I began to wonder how the eagles out at Eleven Mile Canyon were doing. The last time I was there I didn’t see them and there were reports that the eaglet had taken flight, so it has been a couple of weeks since I have seen them. By 6:30 I was itching to get outside with my camera so it seemed a good day to pay a visit. When I first arrived I didn’t see any of them in the nest, not with my bare eyes anyway… I needed a closer look so I got out my big lens and zoomed in. Much to my surprise the eaglet was in the nest, or above it I should say… disguised as a tree branch! I steadied the camera on the hood of my truck and just watched for a while.

Eventually I was rewarded with a short flight by the young raptor, probably a couple of

feet over the nest. I was surprised that the parent eagles weren’t there, I thought I had a handle on their daily routine, with flight taken at about 10:00. So I thought, well… why don’t I hang around until a little after 10:00 and see if anything happens? In the meantime I whiled away the time by shooting an occasional shot of the red winged blackbirds that were hopping from perch to perch, occasionally dropping down to the clear blue water of the South Platte for a drink.

At 10:15 I was about to give up on the eagles and settle for the images of the eaglet in near flight. While messing around trying to photograph one of the speedy little swallows over the river that like to taunt me, I looked up and spotted one of the adults in the nest! Soon I also saw the other parent swooping in and I whipped my camera up and laid on the back focus button… The huge bird came into view and I started shooting. Only my middle focus point was activated and in precise mode so I did my best to keep that single small point on the eagle as he glided over to the nest and spread his wings for the landing. I was so happy to discover that quite a few of him preparing to land on the nest turned out pretty well 🙂

unfortunately the baby had ducked down and wasn’t really visible from my angle. Shortly thereafter one of the adults suddenly and without warning took flight  again, I imagine for another fishing trip over Eleven Mile Reservoir.

I hung around a few more minutes hoping that the youngster would join mama for a couple of poses but I was thinking the little one was probably tired from all his pre flight practice earlier in the day. I really hope I have the good fortune to be there when he eventually takes flight for real and joins his parents in the fishing. I wonder how long the eaglet remains with his parents before departing to make his own life? I’ll have to look that up I guess 🙂

As always, the best of these images are available for purchase on my website as wall art on glossy metal or acrylic sheets, stretched canvas and traditional matting and framing. Tons of cool household and gift items are also available with any image you like including coffee mugs, t-shirts, blankets and pillows, battery chargers, phone cases, stationary and much much more! Just click on any image you like and all the choices, sizes and prices will appear! For my viewers interested in images for commercial use, please visit my image licensing portal!