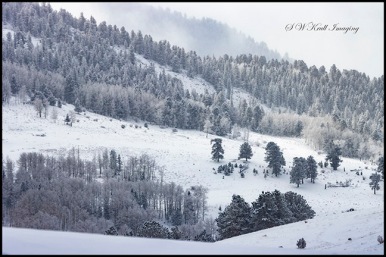 Awoke to an amazing world of white calling my name 🙂 A foot of fresh powder blanketed the mountains of the Pike National Forest and I was eager to put on my snowshoes and tackle the deep powder. But not before some coffee and pancakes at the Home Cafe of course 🙂

The winding mountain road had been plowed but was still covered in a thin layer of the slippery white stuff requiring a good bit of caution to negotiate before I arrived at the trailhead. Unfortunately the parking lot had not yet been cleared but I decided to take a chance and enter anyway. I didn’t think I’d get stuck but figured even if I did that the lot would be plowed before I was back from my hike. It wasn’t long before I had lost momentum and was indeed stuck in the deep snow. No matter, no one was going to be around to complain about my poor job of parking 🙂

It was a long tough slog up the mountainside in the deep powder, fortunately faint

imprints of my previous climbs were still visible or I would have been sinking two feet into the deep mantle of white! As always I was hoping for a glimpse of the elk herd or even some mule deer, but I was well aware that the animals were too smart to risk a cougar attack with unnecessary risk in the deep powder. Indeed there was no sign of wildlife anywhere on the mountain, save for a rabbit or two.

The storm was over but as it does many times at this elevation on the mountain, snow continued to drift lazily out of the haze enveloping the entire world, reflecting light like a million tiny prisms. I tried capturing the phenomenon but it does not appear that I was successful. I had packed my 100-400mm lens in hope of capturing some wildlife and it was not the best choice for the expansive scene before me, but I did enjoy shooting a few of the snow covered trees with it. Eventually I was relieved to arrive at the summit and catch my breath. The snow was still deep but at least the steep climb was done with!

The aspen and pine trees were covered in frost and snow, looking like ghosts in the distance against the white snow and grey skies in the background. More snow is on the way today so if all goes right maybe I’ll get another chance tomorrow to visit my favorite winter wonderland!

Finally back at the parking lot I was faced with the unpleasant reality that my two wheel drive truck was deeply embedded in the slippery white stuff 😦 I cleared a bit of snow with the snow shovel that I had wisely packed but it did little good other than to get me a couple more feet along my way. Eventually it became clear that I was not going to get out of putting on the chains, which proved to be the right weapon to get me back on the road 🙂

Tired and sore now, but still happy that it was a good day in the Colorado high country. As always some of these images and more are available for purchase on my website as wall art on glossy metal or acrylic sheets ready for hanging, stretched canvas and traditional matting and framing. Cool gift and household items are also available with a beautiful Colorado Rocky Mountain scene from S.W. Krull Imaging!