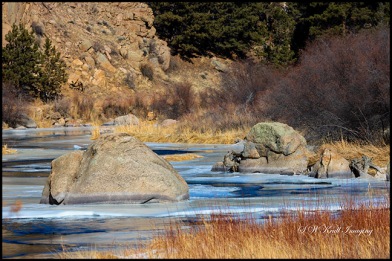 Something I’ve always wanted to do… See the headwaters of the South Platte River flowing through Eleven Mile Canyon in wintertime. Shouldn’t be that hard to do but I never seemed to have the right tires or brakes or time or whatever… But yesterday it finally all came together and I made the journey! I was kind of thinking about leaving my truck at the entrance but that idea was quickly abandoned when I got out to pay. Dang it’s cold in that canyon! Apparently the canyon walls are quite good at holding in the cold!

turned to the west bare dirt greeted me and it looked like the journey should be doable even in a two wheel drive truck. As I drove past the roughest part of the river, a place where I usually climb down to the riverside for some shots and video of the roaring whitewater it became apparent that climbing on the banks was going to be out of the question in winter. Oh well I thought, I was sure the riverside would be accessible in other places. 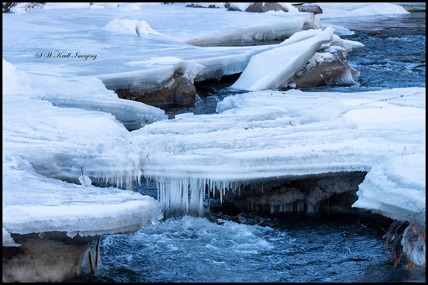 And it was in a few places but mostly a riverside visit in the Rocky Mountain winter is a pretty treacherous endeavor 😦 In some places there was just deep snow to go through, but in others it was ice so solid that my Ice Trekkers were not even enough for traction. And in other places there was an icy shelf over the river bank so that it wasn’t possible to tell where the bank ended and the river began. One wrong step and one might find himself on an unpleasant winter swim in the icy waters of a raging Colorado river!

So getting pictures turned out to be a very difficult proposition. In summer you can pick

yourself right down to the waters edge to get past the vegetation that lines the entire bank for an unobstructed view of the river. But in winter so many good views are ruined by a bush or a tree or just bramble sticking up from the riverside. Getting just the right angle on the view is so important but I was simply not able to do that yesterday.

But I certainly enjoyed myself and had a great morning along the beautiful river. The canyon is always a beautiful sight to behold with it’s magnificent cliffs and eagles soaring overhead. Unfortunately the times I saw an eagle I was equipped with a wide angle for shooting the river. When I put on my long lens I could not find an eagle anywhere!

Well anyway, I did manage to get a few pictures I like, some of which are up on my website for purchase as wall art on  glossy metal or acrylic sheets and I also was able to put together a nice movie called Eleven Mile Winter on my YouTube site 🙂 Don’t forget to subscribe if you like the video and want to be notified each time a video is published!

Also note that I was not sponsored by Ice Trekkers, I purchased them with my own funds because I think they are a good product and frequently find them useful on my winter adventures! I also recommend using a trekking pole or cross country ski poles for safety as you climb the banks of the river in snow!