Still reveling in the images captured on our autumn excursion to Rocky Mountain National Park… I was thinking this image really captures the essence of the entire experience, with the majestic herd of elk that call Moraine Park home in the high mountain autumn season.

In the background you have the aspen trees donning their autumn gold and red glory while in the foreground the big bull is rounding up his herd for nightfall. This big bull doesn’t get much rest during the fall rut, he has cows to keep safe, other bulls to fend off and territory to maintain. While the cows grazed on the mountain grass the stately beast stayed alert, maintaining vigil over his hard fought harem. The crowd of people gathered on the road with their cameras didn’t make this fellow’s job any easier 😦 In this particular scene some of the cows had crossed the road, while others were afraid to pass through the opening between the cars and people that the rangers had made for them.

Eventually the huge male crossed the road and rounded up the cows that were scattering on the eastern side of the park. Not a single creature in the entire park dare challenge him, the cows obeyed without question while several bachelor bulls watched on with envy 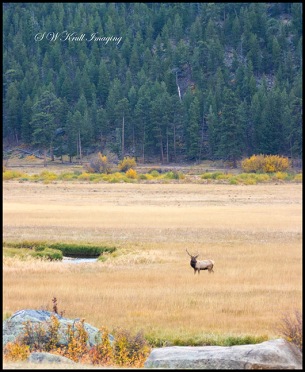 advancing no closer than a couple hundred yards, appearing tiny in the distance even through our powerful zoom lenses. There was one lonely bull bugling in vain over the ridge, out of sight but close enough to draw the ire of the massive leader. Eventually he trotted to a high vantage point at the top of the ridge to investigate, but returned when he was sure there was no challenge to his domain. Even the people lining the road scattered in fear as his thundering hooves shook the ground when he passed by.

Eventually dusk overtook the valley and there was no more light for our cameras to capture as the cows began to lie down in the quiet of a beautiful Colorado autumn evening. Finally, the supreme commander of the valley would finally get some rest.

As always, this image and  more are available for purchase on my website as wall art on glossy metal or acrylic sheets, stretched canvas and traditional framing and matting. Tons of cool gift items are also available with one of my images, including Christmas cards, coffee mugs, t-shirts, blankets, pillows, and tech gadgets including battery and phone chargers. Click the link to enter the site and explore the possibilities! The images are arranged by collection or by product if you desire!