There is no better time than autumn for a camping trip in Rocky Mountain National Park! The colors and the wildlife action are at their peak, the weather is cool and dry and the crowds of summer have largely subsided. So photo buddy Kevin and I loaded up our gear and steered towards Estes Park for the once a year elk photography bonanza. Last year we only gave ourselves one day and found there was far too much to take it all in. 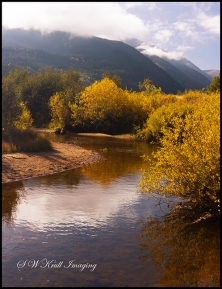 This year we decided to give ourselves the best part of two days, a nice trip up on the first day for the sunset scene followed  by a night of camping with the idea of catching the sunrise action on the second day. The only  problem with this plan was that even two days isn’t enough to take it all in! Rocky Mountain National Park is so vast and beautiful that you probably could not even take it in if you had a week to explore it.

But our plan as it was came together perfectly. We arrived in the park by early afternoon giving us time to look around, survey all the best elk viewing locations and get our gear set up for the evening appearance of the Moraine Park Elk Herd. And quite a scene it was… The main herd was lorded over by one huge bull who stayed busy until dark keeping his cows together while watching diligently and listening intently for any 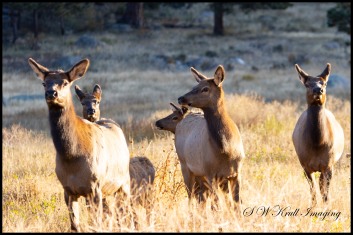 threats to his domain. At one point he heard the bugling of a rival bull over the ridge and trotted off to address the threat. Some unruly cows crossed the road and his harem was split, which would have been no big deal were it not for the unbroken line of cars and spectators right through the middle. Some of the cows were afraid to cross so eventually the big male returned and was forced to address the chaos. He crossed the road and ventured to the distant 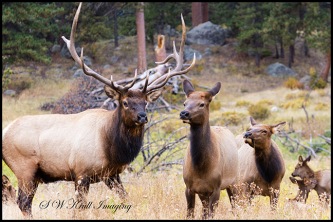 boundaries of his domain to warn off some bachelors that were nosing around his perimeter. The park ranger patrolling the road, when she discovered the issue, separated the crowd, moved some cars and made way for the herd to pass back and forth. The bull was then able to round up all the wayward females and reassemble them in the meadow on the west side of the road.

make the short journey over to Moraine Park Campground to set up camp. Tent campers are provided an entire loop on the far end of the campground away from all the RV’s and their generators, so we proceeded to our designated spot in D loop. It’s a beautiful quiet campground with clean facilities, flat tent pads, bear boxes and fire pits. It’s also the only campground open in the winter months, which is fine but if you plan to go there you should definitely call the park for a reservation. Due to the presence of bears there are no trash receptacles, any packaging or food wrappers will need to be stored in the bear box until can get to the main dumpster at the entrance.

I’m not going to lie, the autumn night air is going to be chilly so bring the proper winter wear! It was only 35 degrees at sunrise when we once again took up our position in Moraine park. The big bull and his harem were already gathered on the east side of the road in the heavy fog of the cold morning. It was here that I captured some of my most dramatic imagery as the morning sun lit the fog and the autumn leaves in the background. The animals were quite active, making use of a tripod a bit difficult but necessary due to the subtle morning light.

By the time the sun was completely up we were ready to check on some other locations and wander into Estes Park for some breakfast while we discussed the plans for the day. At length we decided to break down camp and explore Fall River Road, the old dirt road that carried travelers to the park summit which is now the Trail Ridge Road visitor center.  Fall River Road is a rough nine mile one way dirt road that skirts the south side of the ridge with beautiful views of Longs Peak to the east with a beautiful hike and waterfall about halfway into the drive. The falls were in harsh light by this time, with shadows too deep for  good photography but that didn’t stop me from capturing some video with my phone 🙂

The wind and cold on the summit were horrendous, blowing so hard that I was barely

able  to stand still enough to even capture this phone cam picture! After scouring the visitor center for a couple of souvenirs we began the drive through the fierce winds down Trail Ridge Road in view of massive Longs Peak. I tried a couple of spots for pictures but the wind and harsh afternoon light got the better of me, not overly excited about the images I captured from the high alpine reaches of the park.

By the time we were back in the valley it was early afternoon and Bear Lake was the last thing we had in mind to explore. However by that time the park was filling with visitors and the parking lot was full, according to the sign at the park and ride. A ride on the bus with an armload of camera gear wasn’t too appealing by this time so we decided to call it a day and head for home.

Today of course finds me at my computer monitor looking over almost 900 images and reveling in the memory of an amazing trip. As always the best of  the day’s capture are available for purchase on my website as wall art on glossy metal and acrylic sheets, stretched canvas and traditional framing and matting. Also available are tons of cool gift items, apparel, tech gadgets and handy household items with a S.W. Krull Imaging picture.