Alpenglow, the amazing solar effect that causes a pink glow in the atmosphere opposite the rising sun is how the Sangre de Cristo Range of Colorado acquired it’s name.  The Spanish explorer Antonio Valverde y Cosio was impressed by the reddish snow capped peaks at sunrise and named the range after “the Blood of Christ”. 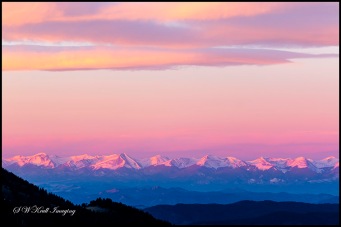 I too am impressed by the beautiful effect on that magnificent mountain range and had planned to arise early enough on one of my days off to make it to the overlook for a photo session. This is the best time of year to see the effect, the sunrise in the east is at a perfect angle for the effect to fall from the sky on the rugged range.  I think it apropos that my opening would fall on Easter weekend, when the Blood of the Jewish carpenter was poured out to save souls in eternity for all who would believe and call upon His Name.

I have been watching the sky every morning for a few weeks, judging the sunrise and looking for the time of morning with the greatest effect. That time turns out to be between 6 and 6:30 at this time of year, so it was coffee and  blueberry muffins at 4:30 this morning to give me enough time to come out of my morning coma before hitting the trail. Big Dog and I pulled into the overlook right at 6:00, just as itt was just starting to get light and the band of red spread across the sky high above the mountains. It would be another 15 minutes or so before the light would settle down upon the beautiful snow capped range.

When it finally did I was ready, ISO 100, camera set to Av mode and aperture at f5.6. I wasn’t too concerned about having a lot of depth of field, pretty much everything in my photograph was going to be at infinity. I was parked at a perfect angle so I just steadied the camera on the door of my truck rather than get out and mess with a tripod. In retrospect, after looking at some of my resulting shutter speeds, I probably should have. I have a lot of 1/30 and 1/15 of a second captures and with a long lens it would have been wise to have had extra steady support. Oh well, the pictures look nice anyway 🙂 The first one I think is the best example of this wonderful solar effect that I have ever achieved!

These pictures, the spectacular snow capped mountain picture with the polarizer that I was testing with yesterday and some of my recent bighorn sheep pictures are available on my website as wall art printed on glossy metal and acrylic sheets, stretched canvas and traditional framing and matting! Tons of cool gift, household and tech items are also available with a picture, including t-shirts, battery chargers, gift cards, yoga mats, shower curtains, beach towels and much much more!