Fortunately for me the weather forecast for this morning was wildly inaccurate. It was

supposed to be 4 degrees and snowing so my popplans were to just sit on the couch like a vegetable and drink coffee 🙂 I was getting a pretty good start on just exactly that when Big Dog came wandering in from the bedroom asking for his morning constitutional… So on went the coat, gloves, hat and thermal underwear and out into the elements we went! 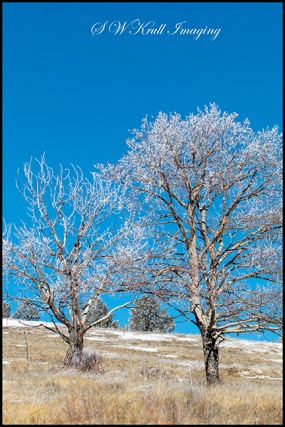 I had looked out the window earlier and could not see the mountains for the clouds and mist so I didn’t bother to bring the camera, we just walked down the street to the open space. But as we got a bit closer to the saddle I could see that it wasn’t just clouds I was viewing! Filling the Arkansas River Valley was a beautiful layer of fog which I knew was going to need some closer examination! So I hurried Big Dog along and loaded him into the truck while I ran in and got the camera.

And off we went to snowshoe trailhead for a better view of the Sangre de Cristo and the Arkansas Valley from the summit of Little Grouse. And it was so well worth the trip. First of all the snow and fog had left behind a beautiful coating on the aspen grove at the bottom of the hill which I deemed worth a couple of captures and I thought the bright blue Colorado sky was amazing!

Then from the summit the view was stunning. The mountains in the background were just beautiful as they jutted above the fog in the valley below, and there were a couple of the smaller peaks that were just peeking through the fog in the lower valley. And as with the aspen trees, the dense pine wilderness of the Pike National Forest was also sporting a new mantle of white from the fog and snow.

These images are available on my website as wall art on glossy metal and acrylic sheets, stretched canvas as well as traditional matting and framing.