It was cold  this morning, near zero I think but not cold enough to keep us from our hike on the high peaks of the Pike National Forest 🙂 Storm clouds were rolling in over the Sangre de Cristo Range but the sky was still a beautiful bright blue overhead. As Big Dog and I strode along through the high meadow I noticed that there were glittering

snowflakes drifting down from the frozen sky. By this time we had gone around the summit past the amazing view of the Continental Divide and heading back east toward the rising sun. The snowflakes were glittering in the sunlight and it was like we were walking through diamond dust falling from the cold blue heavens.

We often experience that phenomenon up at this elevation. I guess this high we are actually in thin clouds sometimes and it is so cold that the moisture in the sky is literally frozen and falling out of the sky. If we were lower we would be looking up at a snow cloud but from here there is snow falling on a clear day. Well anyway, it was an amazing scene to see it in the morning light that way! 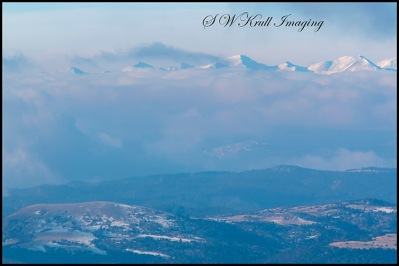 Also today I read a heartbreaking story called the Unnamed Foal. It was a story in my inbox about a foal that had died from shock in one of the cruel and violent BLM wild horse roundups. These beautiful creatures are literally dying from greed. Welfare ranchers in the west grazing their cattle on public land can’t stand the idea of sharing with a few of our wild horses collude with the government to have them rounded up and slaughtered. There is no excuse for it and it is just pure greed driving it. Please consider liking and giving to the American Wild Horse Campaign to try to save our wild horses. If someone doesn’t do something some day all of these magnificent creatures will be gone.

On a more positive note, our Yellowstone wolves hit the big time. High profile exposure on 60 Minutes in a segment called the Wolves of Yellowstone gives me hope that the good people of this country are finally catching on to the value of our wild animals! Doug Smith, researcher and spokesman for the park was asked if the wolves knew to stay in the park to which he explained that these wolves don’t know about hunters and they don’t know where the park boundaries are. Not a lot of people know that hunters wait just outside the park boundary for a wolf to step just a couple of feet over the line where they are then shot dead, robbing from thousands of park visitors the joy of seeing a famous and beloved animal forever. What is worse, the hunters often locate them with the very radio collar placed on them at great expense by the park researchers to study and preserve them. Please write to your congressmen to demand a buffer zone between the park and the selfish miscreants who seek to kill them.

As always, these photographs and more are for sale on my website as wall art and cool household and gift items.