Wasn’t too sure what I was going to do today… getting back in shape at my age is no easy task and I just felt tired this morning. But I resolved to get on my mountain bike with my camera backpack and head down the hill for a 50 cent cheese omelette at the casino. Figured I could just call it good from there if I decided to, but thought maybe at least having the camera along I might be inspired to go further 🙂 And when I got done with breakfast it was so beautiful that the idea of just going home became unconscionable 🙂 So off to Victor it was!

Saw a small herd of mule deer along the way so I had to get off the bike and get a couple of shots. Unfortunately by the time I had my camera out of the backpack and ready to go the deer were getting nervous and headed off to other parts 😦 But I still thought this one turned out kind of nice, even though they were already a ways away. It appears a few mountain wildflowers are beginning to bloom up here at almost 10,000 feet of elevation! 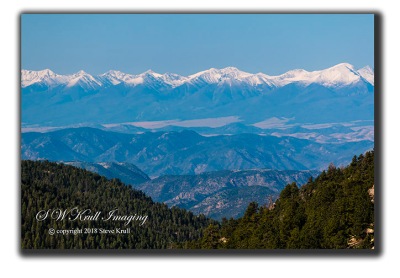 Next stop, just short of the bridge in front of the mine I found an abandoned mine site that had an awesome view up the valley all the way to the Sangre de Cristo mountain range, and it appears that there is some new snow blanketing the high peaks. By then the sun had begun to light up the haze a bit too much for good pictures so I thought it might be a good time to try the polarizer on my #Canon F4l 70-200 long lens. The scene through the viewfinder was much more dramatic with the dark glass in place, so this last one of the day is the one I chose for this blog post. I have many more to process, including some of the alpenglow effect on the range before sunlight that I shot while taking Big Dog for his exercise and morning constitutional 🙂

Now back home after a good hard ride up and down the hills of the Cripple Creek mining district. Glad I didn’t let the early morning negativity defeat me today 🙂 Hoping all my readers enjoy the pictures, please check my website for new prints and gift items that will becoming available in the coming days as I get around to processing them!