The storms of early April have finally abated and sunshine has returned to Ute Pass. I am getting a late start today and even though I knew that all the wildlife would have already finished their morning feeding and bedded down for a nap, I need the exercise and the climb up the mountain as conditioning for adventures later this summer.

As I strode along the rugged trail I contemplated my future. Her recovery at the hospital is progressing slowly and not all of the news is good. Cold hard reality is settling in as I confront a future completely different than the one I had planned. How does one come to grips with the possibility that all of our hopes and dreams and plans may not be possible after all?

The mountain was magnificent this morning with a brilliant white coat of fresh snow and I managed to stop and snap a few pictures that I was looking forward to sharing. After returning I went about my usual exercise of exchanging the camera chip with one from the bag, putting the new chip in the reader and the old one in the camera. For the first time in almost 10 years of digital photography I elected not to hit the view button before formatting the chip. As I watched the chip in the reader load onto my laptop I was mortified as I realized that this was also the first time in 10 years that I didn’t actually put the new chip in the reader. I now have two copies of the April 3 snowstorm on my hard drive and no pictures of the magnificent mountain today.

Oh well, I’m glad I learned my lesson on common images. The mountain doesn’t look any different today than it did last spring so it was no big loss. And I did get the exercise that I went up there for in the first place.

Just so you can see what it was like, here is an image from last spring 🙂 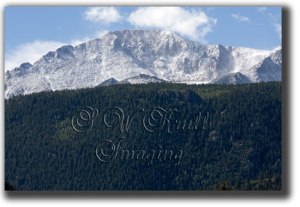