Nice ending to a lazy Sunday… Thanks to my ever energetic canine explorer I was not destined to have a full day of rest on this Lord’s Day 🙂 Son Boy was getting restless late in the afternoon so I decided to take him on a good hike to the Grouse Mountain overlook near Victor, where gold was discovered in 1891 by William Scott Stratton. Being late afternoon I was thinking we might see some wildlife so I brought the camera and my F4L 70-200, my go to lens for wildlife hiking.

Sure enough, about a quarter of a mile up the trail we spotted a huge bull elk but unfortunately he spotted us first… and quickly left the scene. The hike to the top is only about a three quarters of a mile where there is a beautiful vantage point overlooking the Sangre De Cristo Mountains to the south and the Collegiate Peaks to the west. It was pretty hazy today but I stopped for a few captures anyway before heading back down to the trailhead. The Sangre and Collegiate Peaks are just too beautiful to pass by without a picture! 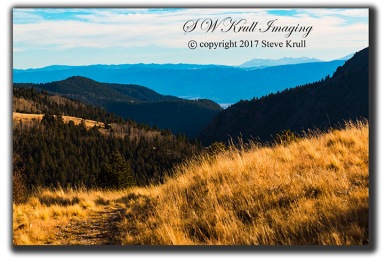 I’ve been feeling the call to explore a bit south of there on a higher mountain but haven’t seen a trail and the worry of unmarked mine cavities has held me back. Today however I noticed some sort of marker, a cairn with a flag… So we wandered over to take a look and discovered that it said “Trail”. Sure enough there was a faint trail and it looked like another cairn about 50 to 75 yards ahead. We had a bit of extra time and Son Boy looked game so we headed down for a better look. Soon a more obvious trail appeared which gave way to what appeared to be a turn of the 20th century wagon trail that headed off into the distance towards the south and the Sangre De Cristo. As I strode along the rugged dirt path it occurred to me that the ground I was on was probably exactly the same as it was over a hundred years ago when the original prospectors walked it hoping to strike it rich.

Finally… a trail in the Cripple Creek area that doesn’t just end in a turnaround! Now this was going to require some investigating! I followed the trail around the mountain towards the taller mountain and was determined to reach a point ahead where I could see that there might be a good view to the west. Didn’t get my view today, but the trail continues into the countryside as far as the eye can see. Now I am eager to take this trail further, perhaps there will be some abandoned mines off the beaten path, some that haven’t had their view obstructed by the barbed wire and fences of modern civilization. Also I am inspired to try new roads in hopes of finding new trails where I can follow in the footsteps of 19th century explorers and gold prospectors… I doubt I will find any gold nuggets, but perhaps my blog accounts and pictures will produce some digital gold 🙂

Stay tuned to S. W. Krull Imaging for the results of my next hike into the Cripple Creek back country! Also be sure to click the links at the left or in the menu section if you are on a smart phone, to view images for sale on my website… Wall art, clothing and a wealth of gift items are available there!