Cars, trucks with camper trailers and RV’s are streaming out of the mountains by the thousands today as the end of the Labor Day holiday marks the unofficial end of summer. Of course here in the high country of Colorado, that means snow could come any day now which is fine by me, although there will be plenty of nice warm days all the way up to Thanksgiving and sometimes beyond.

A futile visit to Manitou Lake yielded very little, by first light hikers and fishermen were already piling into the park scaring away any birds that we might have been able to photograph. There were a couple of distant blue heron to dispel any rumors that they have already migrated, a couple little yellow birds that were far to elusive to photograph, and this cute little family of merganser ducks, which finally did pass by close enough for a picture.

Much to our surprise though, it was trip to Walmart that proved the most successful. As we drove into the parking lot we spotted a red-tailed hawk sailing down the dry creek bed and soon there were two hawks circling overhead in an amazing raptor dance high in the sky. So here it is… my last image of the summer!

Tonight I’m just relaxing as a calm has settled in over my little town, and hopefully tomorrow the birds and animals will begin to get a chance to return to their pre tourist season behavioral patterns. To sum up my feelings about the end of summer, “Thank God it’s over!”.

Also don’t forget to check out my books and calendars on Lulu Press and Amazon including my latest, “Wildlife Photography in the Colorado Rockies” and this year’s wildlife calendar “Colorado Wildlife 2023“!

As always, the best of these images and hundreds more are available for purchase on my website as wall art on glossy metal or acrylic sheets, stretched canvas and traditional matting and framing. Tons of cool household and gift items are also available with any image you like including coffee mugs, t-shirts, blankets and pillows, battery chargers, phone cases, stationary and much much more! Just click on any image you like and all the choices, sizes and prices will appear! For my viewers interested in images for commercial use, please visit my image licensing portal! Also, if you would like to see a more complete record of today’s images please follow my Instagram account!

Many of my adventures have also been captured on beautiful HD video on my Youtube Channel! If you enjoy my content please subscribe to my channel, subscribers have a big impact on channel rankings!

One of my most favorite places in the entire world reopened after being closed for months due to the accursed Covid-19 pandemic. I started the day with high hopes, pictures of the bighorn and a bear filled the Waterton Canyon Group and I was so hoping to get my chance today. 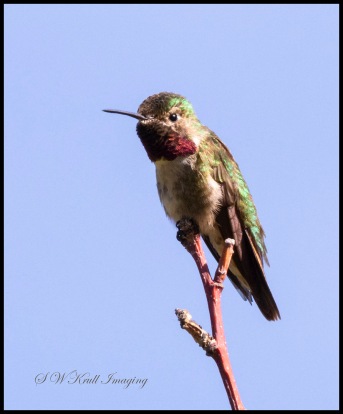 The mountain bike ride along this beautiful stretch of the South Platte River as it flows down out of the Rockies on it’s way through Nebraska where it connects with the Mighty Missouri is about six miles one way, unless of course you have the skills to continue on the single track portion of the Colorado Trail! It is not always easy to catch the animals at the river, you have to be at the right place at the right time so I just took a leisurely pedal all the way to the top of the canyon.Strontia Springs Dam is the high point of my ride and I stopped there at the picnic tables to take a break, having seen nothing to photograph for the entire six miles. While sitting there I spotted a cute little hummingbird resting on the very top of a small tree… I wondered if I could get a shot, got out the camera and gave it a try. Fortunately the little fellow sat there for a while and then returned a couple of times giving me time to catch him in a few poses 🙂

Eventually I mounted my bike and began coasting back down, intently watching the canyon walls and the river for the sheep and the bear. I stopped a few times to take breaks and waste time hoping the beasties would come down, all the while asking others on their way up and down if they had seen any animals. 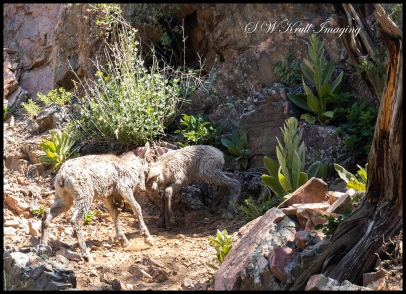 Finally near the bottom I refused to give up and decided to ride back up a ways to the the lower dam where I planned to stop for a  while and hope for the best. As I neared the dam I spotted a few bighorn ewes down by the water on the opposite side of the river from where I usually see them. I snapped a couple of boring pictures of the scraggly looking ewes by the water and then I noticed a couple of lambs further up the cliff side playing on a plateau. Fortunately I captured them playfully butting heads which made for a great picture which I have already uploaded to my website , one of the most magical scenes I have ever photographed 🙂 I didn’t think so while I was there because the sun was so 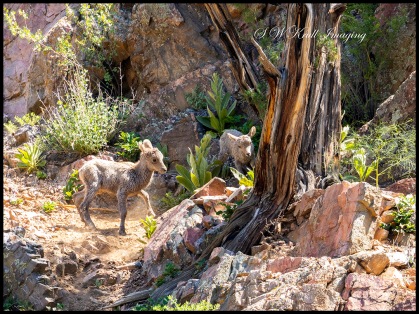 bright I could hardly see anything, much less the LCD on the back of the camera! But now that I am home looking at the images on the computer I am pretty happy 🙂

I wanted to catch some video but the whole show was over within about 15 minutes and about the time I thought about it they were already bedding down. Nothing interesting about animals sleeping 😦

Eventually the mama ewe noticed that the little ones were not with the main group anymore and the little band of females began the climb up the canyon walls to search for the wayward youngsters. She must have had a pretty good idea of their whereabouts as they went right to them. Soon the entire herd found a shady spot to escape the intense front range heat and lay down for their afternoon nap.

I packed up my equipment and began the ride to the bottom while continuing to hope for a bear sighting. I didn’t see a bear but I did run across these cool looking Common Merganser female ducks which were worth getting the equipment back out for a few captures! After that I was already past all the good animal viewing locations so I pedaled hard back to the parking lot. All in all a pretty good day… a 12 or 14 mile bike ride in spectacular mountain scenery can never be a bad thing!

As always, the best of these images are available for purchase on my website as wall art on glossy metal or acrylic sheets, stretched canvas and traditional matting and framing. Tons of cool household and gift items are also available with any image you like including coffee mugs, t-shirts, blankets and pillows, battery chargers, phone cases, stationary and much much more! Just click on any image you like and all the choices, sizes and prices will appear!