I promised this bird’s eye view with the wide angle… and today was the day 🙂 I had other reasons for making this climb too… I wanted to see if I could find Mr. Hawk, the rough legged hawk I found up there the other day. There was a beautiful fog bank today so I was also thinking I might be able to get a neat wide angle of the Sangre de Cristo Range. 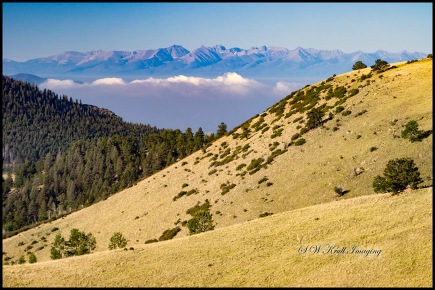 This time I was smart, in addition to packing the wide angle I also had the forethought to bring some fluids and energy bars 🙂 The initial climb to the top of the first ridge is pretty invigorating to say the least, but is often rewarded with a few shots of deer or elk at the top. Nothing today and no sign of Mr. Hawk either.

Beyond the high meadow is a patch of forest that I’ve been eyeing for a couple of years, the place where the elk go to vanish when I try to follow them. I’ve always wondered what it was like in there, I don’t see any sign of a real trail of any kind. I decided against going directly in there and chose a path around the edge as I climbed higher with the summit in mind.

Eventually I had two choices, the long way around the south end of the summit, or a short cut directly through part of the forest, I chose the short cut and finally after all these years I got to see inside the apparently impenetrable woods. It seems as though this forest has been untouched for a long time, many fallen trees lying all over the place making a direct path impossible. Don’t think I would want to be there in a windstorm, you might be the unlucky recipient of a large pine tree on top of your head 😦 I found a deer trail of sorts and followed it in and around all the dead foliage to the final approach to the summit.

From there it was just a short walk to my favorite vantage point, one that I had first 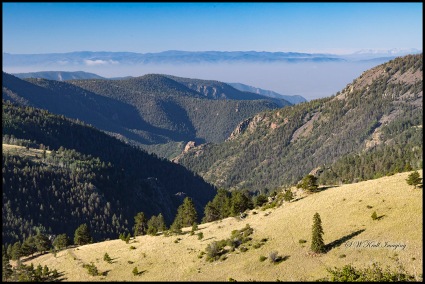 scouted out with my dog years ago. I found a good spot to take off my pack and sit in full view of the beauty before me. The dense fog of early morning had given way to a picturesque layer just beneath the Sangre de Cristo Range in the distance. I just sat there for a while taking in the view, but mostly just feeling heartbroken that my four legged buddy crossed Rainbow Bridge some time back and wasn’t there to enjoy the conquest with me.

Eventually I summoned the strength and attached my 24-105 lens with a circular polarizer to cut through the residual morning haze. As it turned out the images looked the best with about a 50mm focal length, any wider and the Sangre were too insignificant to do the scene justice.

I continued to look for Mr Hawk on the trek down the other side of the mountain, but he was nowhere to be seen on this day. In fact the landscapes that I shot at the summit are the only record of today’s hike.

As always, the best of these images are available for purchase on my website as wall art on glossy metal or acrylic sheets, stretched canvas and traditional matting and framing. Tons of cool household and gift items are also available with any image you like including coffee mugs, t-shirts, blankets and pillows, battery chargers, phone cases, stationary and much much more! Just click on any image you like and all the choices, sizes and prices will appear! For my viewers interested in images for commercial use, please visit my image licensing portal!

In my quest for the perfect circular polarizer for my Canon 100-400 lens I finally settled on the B+W 77mm XS-Pro Kaesemann High Transmission Circular Polarizer MRC-Nano Filter. Dang, that’s a mouthful but what does it all mean? For starters, Kaesemann is a precision glass company purchased by Schneider Optics of Germany in 1989. The high transmission designation refers to the ability of the glass to transmit light. This filter is advertised at 99.5% with a filter factor of 1 to 1.5 stops of light loss due to the darkened blue glass. The MRC feature is Multi-Resistant-Coating, which is a series of layers designed to prevent reflections and ghosting while the NANO designation refers to a hardened eighth layer that assists in keeping the filter clean. The B+W filter is constructed using a brass outer ring that provides an exceptionally smooth threading capability when affixing the filter to the lens. The rotating mechanism for turning the filter is stiff but very smooth. The construction of this filter is superb.

That’s all well and good of course, but does it work, that is the real question! Today looked like a perfect day to find that out as the sky is perfectly clear and the sun was beating down on the snow capped Sangre de Cristo at almost a perfect 90 degree angle this morning. Just looking at the mountains they appeared washed out and faded to the naked eye, perfect conditions for a polarizer.

So, I pulled into the overlook parking lot and shot one picture with no filter followed by another picture with the circular polarizer with the glass turned to maximum effect. I shot in raw as always, but applied no processing to these two images, as I didn’t want to pollute the results of the test with a bunch of Photoshop adjustments. Here they are, first the mountains with no filter and then with the filter: 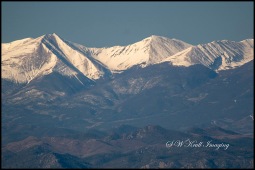 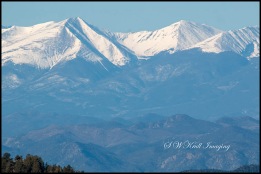 As you can plainly see, the second image has significantly increased saturation and detail in the white highlights of the snow capped peaks with a much deeper blue in sky. The snow and trees just below the peaks are also much more visible in the polarized image.

I will also be trying the filter out over water when I find some! Not much water around here in this mountain desert, but sooner or later there will be a river or a lake in the sun where I will find the filter useful! All in all I would say I’m extremely happy with this purchase from B&H Photo Online and would highly recommend the filter to anyone using a DSLR camera.

A quick glance down the valley towards the Sangre de Cristo at first light this morning dispelled any notion about skipping another hike with Big Dog today… Of course there was no debate going on in the mind of the Big Dog. As I was sitting on the couch sipping my morning coffee I could see that he was watching me, focused like a laser on the cup. Then the instant that he saw the cup tilt all the way to the bottom he was on his feet like a gunshot, ready to go, eyes pleading.

So… into the backpack for the day’s necessities… It was a crystal clear morning, the usual fog and haze blown away by a weekend of rain, snow and wind and the bright fresh snow on the rugged peaks told me that it was going to be a good day for my B&W circular polarizer. I always use B&W glass, a little pricey but the amazing German quality is well worth the extra expenditure. Finally, getting ready to go… polarizer cleaned and attached, check, chip formatted check, battery charged and inserted, check. Out the door, no turning back. 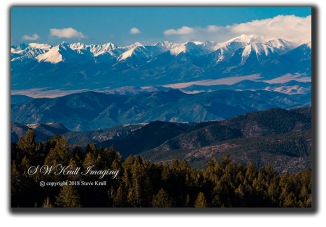 It was a surprisingly cold morning. Last thing last night it was still fairly balmy and I was lulled into believing that Spring had finally arrived… but I was mistaken. Fortunately I had on my hoodie under my jacket by force of habit and my glove liners were still in my pockets from the previous cold snap. I bundled up on the way, hood up, gloves on, neck strap wrapped around to ward off the cold wind.

As I neared my vantage point on the trail I could see that I had made a sound decision to get off the couch and into the fresh mountain morning air. The mountains were magnificent today, the mountain air crystal clear, a perfect day for some more experimentation with the polarizer. Big Dog and I took up a position on the overlook with an unobstructed view of the entire range and shot away. I knew from my last outing with the polarizer that aperture priority with a setting of f8 would be ideal for these conditions so I just set it up and carefully focused the shots on the most dramatic peaks.

The cold wind was causing my eyes to water and I couldn’t really tell on the spot if the images were turning out so I just kept shooting on faith that I had planned my settings correctly. Now, in front of the computer it looks like the day has been a success. The images are clear and the details sharp. The polarizer cut through what little haze did exist and I have a good crop of images to work with.

Please be sure to visit my website to see all the new images I have put up lately along with my new Weather gallery that I discussed and created yesterday! Also, if you are interested in my work, please  click the follow button and you will receive an email notification each time I publish! Followers and viewers are how this page is financed, in addition to print and stock image sales so I really appreciate your support 🙂

Also, I hate to talk about it too soon… but I’m getting kind of wired up already 🙂 A bucket list development! My boss, also an avid Canon photographer has thrown it out there, the possibility of a camping trip to Yellowstone National Park this fall! Seems like too much to hope for right at the moment… but I have been longing for years to see the wolves. Lol, of course I am well aware that it could turn out like my last wildlife journey to Brainard Lake. All summer I was watching other photographers post images of the moose population there, but when I went in the autumn of course, there were no moose to be seen anywhere 😦 Well anyway, stay tuned and we’ll see how this develops!