My mountain bike trek into the back country was way late yesterday, well beyond the early morning hours best for spotting wildlife… of course I brought my camera anyway, you never know! About three miles in I spotted a small herd of bighorn sheep ewe with a few lambs sunning themselves on a rocky knoll across from the Platte River. I parked my bike and got out the camera hoping for a few nice pictures to mark the day.

On my way back to my bike after a few shots of the ladies and their babies I spotted something moving in the water on the other side of the stream. OMG, it was the bear that I have long been seeking, this one a cinnamon colored black bear taking a break from the heat of the day in the cool Rocky Mountain water. I placed the camera on the monopod and snapped a few pictures from my vantage point on the opposite side of the river from the bear. Soon I

decided to go back to my pack for the 1.4x lens extension for some closer views.

By the time I returned though, the beautiful bear had completed her swim and was back on the riverbank nearly out of sight in the dense foliage lining the river. It was at that moment that I spotted more movement in the leaves and upon closer inspection with my long lens I discovered not one but two little cubs clamoring to keep pace with their mommy! They were making their way west in search of berries in the trees along the bank so I hopped back on my bike to follow. 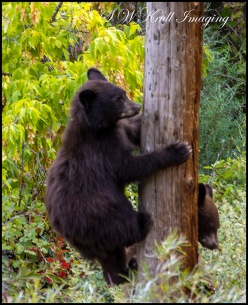 The trio meandered along the shoreline of the pristine river, the little ones occasionally stopping to play while mom searched for the food she would need to survive the long Rocky Mountain winter. At one point the little ones got spooked by something and ran back downstream to search for a convenient place to climb to safety. Mom patiently walked back downstream to retrieve the youngsters and the journey upstream continued. Finally I captured my favorite shot of the day as the little ones frolicked, mom and one of the babies together! I had hoped to catch all three but the little ones proved to be much to busy to stop and pose for me 🙂 I believe I’ll return the week after next with

the hope that I will see them again before they crawl into their cave in the rugged cliffs for the winter.

Eventually the little family arrived at a particularly rugged and steep section of cliff and rock where mom led the little ones up a precarious crevice behind the rocks where there appeared to be a good source of food. I could no longer see the bears, only the trees shaking as the cinnamon bear bent the branches down for her babies, so I climbed on my bike and made my way back to the trailhead.

Wow… what a privilege it was to see these amazing animals up close… and to get to photograph them, amazing. A few others had gathered to take in the amazing scene but the bears paid no mind to the people on the other side of the river. I would like to see the little family make the river their permanent home, living out their lives in peace in the safety of the rugged cliffs of the canyon along with the growing herd of bighorn sheep.

As always, these pictures and more are available on my website as wall art on glossy metal or acrylic sheets, stretched canvas and traditional framing and matting. Also available are many household products, tech items and stationary, all with a beautiful #swkrullimaging photograph!

Wanted to do a little shout out for my wildlife collection of images. These captures span the four amazing seasons of Colorado over the last 15 years and include many of Colorado’s intriguing furry friends. There are currently 422 images in this collection, including deer and elk in all four seasons, mountain goats and bighorn sheep high on Colorado’s 14,000 foot peaks, fox, bear, coyote, birds, small animals.

Please feel welcome to take a look at these amazing creatures on your journey through the Colorado wilderness as seen through my lens. You will see deer and elk surviving terrible blizzards, mountain goats and bighorn sheep standing precariously on the edge of sharp rocks on the tops of peaks at dizzying elevations, storms, sunsets, baby animals and more!

These images are available as wall art on beautiful glossy metal or acrylic sheets, canvas, traditional print material or framed in a frame of your choice! The images can also be purchased on gift and household items such as coffee mugs, greeting cards, beach towels, pillows, shower curtains, shopping bags, t-shirts and more! I sincerely hope you enjoy this pictorial journey through the Colorado wilderness 🙂 But don’t stop here, click the “collections button” at the top of the page to view many more collections, including sports, landscapes and mountain peaks and magnificent sunsets. The commercial stock wildlife collection can be licensed for use by your business for ad campaigns or to create products such as calendars and post cards you can sell for a profit.

Yesterday I was profoundly saddened as I was listening to a conversation between some hunters as they discussed their excitement at the approaching hunting seasons. They spoke of being unable to sleep the night before a hunt from the opportunity to get out in the woods and enjoy nature and the feeling of freedom from standing on ground that may have never known man’s feet before.

I was thinking that I have those same feelings before a photo trip. I hike to the same places, see the same mountains, trees, lakes and wildlife. But then they spoke of the thrill of killing an elk or a bear and I was reminded of a picture of a bear that I was able to snap some time ago. I was excited to finally get a shot of a bear. What I was not prepared for was the feeling that came over me when I saw the animals eyes through Photoshop. They say the eyes are the window to the soul and the beautiful spirit showing through this bear’s eyes was truly moving.

This little family of bears was not threatening in any way. They were just meandering about their business of being bears. They stopped to look at me to make sure I wasn’t a threat and seemed to be a little curious as to what I was up to. This has been true of all the animals I have encountered in my adventures in the mountain wilderness. Some of the more timid animals have run at the sight of me, but many just stood there and looked at me, completely unaware that I could be any kind of threat to them. Just as the bear family, they all were just going about their business of being deer, elk, and coyotes.

When I encounter these animals and briefly become part of their lives, the peace and solitude I experience is hard to describe in words. I cannot imagine breaking the silence and peace with the sound of a gunshot and watching one of these beautiful souls drop into a lifeless heap. I wonder at the kind of spirit that enjoys the sudden disruption in the solitude of nature’s tranquility and the end of a life that was previously minding it’s own business unaware that it was a target in a game for someone’s entertainment.