If I could think of a year in my life that reminds me of this one it might be 1986. The year 1985 had been a particularly tough one and as a result of all the stress I was losing a lot of sleep. At the time I was way overweight from physical inactivity and wasn’t exercising at all after having finished four months of 12 hour days at the end of a major software delivery project. I had just gone through a divorce, was broke and missed my kids terribly.

What followed was an amazing journey from from the lowest point in my life to one of the highest. I guess you could say that 12,600 feet of elevation on the top of Hope Pass in the Leadville Trail 100 would be considered a high point! On a dark and hopeless evening in 1986 I decided to do something positive and dragged out a pair of worn out Nike running shoes to plod out my first mile in many years. By April I had built up enough miles to run my first 10K, the Run for the Make a Wish Foundation in Wash Park, Denver.

Like then, last year’s battle against Tricia’s cancer left almost no time for exercise and once again I’m not in the physical condition that I would like to be. So this year again has me working on a training plan and I am thinking others may be thinking of taking the plunge as well and have been writing some Examiner articles on this year’s running scene. Fellowship with other runners is a big part of motivation so this winter I am highlighting the subject of Social Running and will be interviewing Jamie from the University Village Colorado Running Club for my next Examiner article. So stay tuned, 2015 is going to be a great year for running! Click the subscribe to author button at the bottom of each article or the subscribe button on my Examiner profile and you will receive an email each time a new article goes live so you don’t miss anything!

Happy New Year… 2015! 2014 is behind us and we have a whole new year took look forward to. I do so with some trepidation however, as each successive new year seems to come with a new wave of problems to deal with. 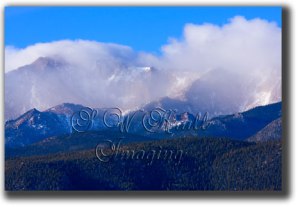 Halo on the Pikes Peak

I actually started my 2015 celebration by taking advantage of the cold and snow day on Nov. 29, 2014 with a look back at my images from 2014. Using Photoshop, I browsed every photo session from 2014 looking for good examples of each for my 2014 review. I created a new photo album for my S. W. Krull Imaging Facebook page to contain these images and also started my iStock 2015 year off with a bang by uploading that batch there as well. It started out to be a pretty good year with some good photo shoots of snow and wildlife in the Pike National Forest and some hikes to Bald Mountain to look at Pikes Peak from above the tree line on the other side of the valley. The year finished with a bang as well with several excellent photo ops here in Woodland Park, including the USA Pro Challenge, a Veterans Motorcycle Rally, the Cruise Above the Clouds car show, Oktoberfest and Apache the wolf at Native American Day.

2014 was a pretty good year for my Examiner role as I finally achieved “Newsworthy” status there by reporting on the previously mentioned events here in the City Above the Clouds. I also finished 2014 up with a couple of Examiner articles, one discussing the 2015 racing schedule and another about making a New Year’s Resolution to run instead of packing on more pounds for the rest of winter.

2014 turned into a pretty good year for the wolves with a couple of surprising developments at the end of the hunting seasons when federal judges finally ascertained that the states were not honest stewards of wildlife they had been entrusted with. Wolves in four of the worst killing states have been placed back under the protection of the Endangered Species Act. Other more progressive states such as California are working to assure that the wolves receive adequate protection from trophy hunters and trappers. My hope is that in 2015 trapping will be seen to be the barbaric and unnecessary practice that it is and the majority of people with good hearts will lobby hard for it to be banned for good in the U.S.

Unfortunately my aspirations were slowed a bit at the end of 2014 when my trusty camera bought the farm, but it was probably getting time for a new one anyway. My rule of thumb is to get a new one when I can double my megapixels. My Canon 40D had 10mp sensor and if I am not mistaken the 70D and 7D MkII both have 18mp sensors, which is close enough to double the 40D especially considering the advancements in technology that has occurred since 2008. I am excited to see what new capabilities I will acquire with the new technology.

Also in 2015 I hope to score a copy of Adobe Light Room. I have been struggling along with an old version of photoshop for years now and have been salivating at the color management tools available in the new software. And of course I hope 2015 is filled with many exciting photo ops. The Lost Creek Wilderness has long been on my to do list and perhaps 2015 will be the year.

2015 is looking like it is going to be a great year. I am hoping the best for myself and my friends as well. Happy New Year!